The Three Waters Reform Programme is a major, intergenerational project. Its aim is to ensure that New Zealand’s three waters infrastructure and services are planned, maintained and delivered so that these networks are affordable and fit for purpose.

The Chair of the Finance and Expenditure Committee of Parliament received public submissions on the Water Services Entities Bill.

This bill is the first of a suite of bills to reform New Zealand’s drinking-water, wastewater and stormwater services—the “three waters” services. Currently, these services are mostly provided by local councils.

Our submission was made in support of the recommendations made by Communities 4 Local Democracy - He hapori mō te Manapori. You can read our submission here.

Westland District Council became a Plenary member of the newly formed Communities 4 Local Democracy  - He hapori mō te Manapori, alongside 23 (and counting) other Councils from around New Zealand in November 2021.

The group was created in response to serious concerns about the Government’s Three Waters reforms, and numbers are growing as local councils consider the implications of the proposed legislation – in particular losing control of approximately $60 billion of community owned assets across the whole country.

Thank you to everyone who submitted their feedback on the proposed reforms. You can read the feedback in the 'What the community said' tab below.

The overwhelming majority of feedback is against the Council becoming part of Entity D.

Councillors will consider the feedback at the Council meeting on 30 September 2021 and send their response to the Minister.

Read the Mayor's letter to the Minister here.

Read our letter to respondents here.

In July 2020, the Government launched a programme to reform local government three waters service delivery arrangements. Currently 67 different councils own and operate the majority of the drinking water, wastewater and stormwater services on behalf of their communities. The Government proposes to establish four new publicly-owned multi-regional entities to deliver these services.

The Department of Internal Affairs (DIA) has released a map showing the proposed boundaries of the three entities. Along with the majority of the South Island Councils, WDC falls into Entity D.

The reform programme is being progressed through a voluntary, partnership-based approach with the local government sector, alongside iwi/Māori as the Crown’s Treaty Partner.

The Three Waters Reform Programme is a major, intergenerational project. Its aim is to ensure that New Zealand’s three waters'—our drinking water, wastewater and stormwater—infrastructure and services are planned, maintained and delivered so that these networks are affordable and fit for purpose.

For further information, see the A3 Summary of the three waters reform programme and the Water service entities overview

Here’s where you can find out more from the Government about the Three Waters Reform Programme:

When Central Government announced the Three Waters Reform in 2020, councils were asked to participate in tranche one of the reform, which involved signing a Memorandum of Understanding (MoU) with the Crown.

All councils including Westland District Council signed a MoU, and as a result, WDC received Government funding of $6.9 million to support water supply and wastewater projects in the district.

A Request for Information (RfI) process was also required through the MoU to collect the information necessary to undertake detailed analysis to support advice on the options for reform to the Steering Committee, local government elected members and Ministers over the coming months.

This analysis allowed Central Government to understand the current state of Councils three waters related asset base and condition of the assets, the operating environment, commercial and financial arrangements and the forecast investment plans. It also helped to identify the potential impacts of reform on the local government sector relative to the status quo. 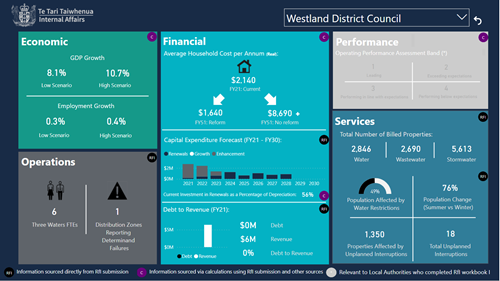 To see how these decisions would impact your household’s three waters services costs, go to your Local Dashboard.

The package has three financial components:

Government to provide support for water reforms, jobs and growth

Westland has been allocated just over $11 million through the “Better Off” package, which is allocated to territorial authorities on the basis of a nationally consistent formula that takes into account population, relative deprivation and land area. This formula recognises the relative needs of local communities, the unique challenges facing local authorities in meeting those needs, and differences across the country in the ability to pay for those needs. Territorial authorities will be able to use this funding to support the delivery of local wellbeing outcomes associated with climate change and resilience, housing and local placemaking.

Territorial authorities are asked to consider the support package alongside the case for change the Government has presented.

What does this mean for Westland?

Throughout August and September 2021 Westland District Council will be working with Tonkin & Taylor, and Grey and Buller District Councils, gathering and analysing information to fully understand the impact of this proposal on the Westland and West Coast communities and will provide feedback to LGNZ. It is expected the Government will release further information on these reforms in early October.

Under current legislation, councils will be required to fully consult with their communities before making a decision on whether to remain in the reforms or opt out.

It is also noted that staff who work primarily on water will be guaranteed a role at the new water service entities. This role will retain key features of their current role including salary, terms and critically – location.

What are the next steps?

During this eight-week period of analysis and consideration, LGNZ will support councils to understand what the package means for them.

There is a commitment from all parties for the need to spend more time working through some issues that are important to all of us These are:

Feedback on the proposed reforms has now closed. Council will consider their position at the Council meeting on 30 September 2021 and provide their feedback to the Government.

Westland District Council firmly rejected reforming the structure of Three Waters in Westland at their meeting on Thursday 30 September based on the current information available from Government, but left the door open to further consideration of the matter if more specific information becomes available.

What have we said

Mayor's letter to the Minister of Local Government

Mayor's letter to the Minister of Local Government

Livestream recordings of our Three Waters Reform - Public Engagement meetings can be viewed on our Youtube channel.

Livestream recordings of our previous meetings can be viewed on our Youtube channel.

What the community said

Here are the responses to our request for feedback from the community. Some personal information has been redacted under s 7(2)(a) of the Local Government Official Information and Meetings Act 1987.

Q 4: Average cost per household as per Entity D model

What do other councils think?

You can find out what other councils around New Zealand think of this reform here.

Where can you find more information on the reform

You can view the overview of the programme here.

Here are the key projects that are happening in the Westland district now.

Please wait...
Did you find this page helpful?
Please tell us how we can improve the information on this page optional

Thank you, we appreciate your feedback!